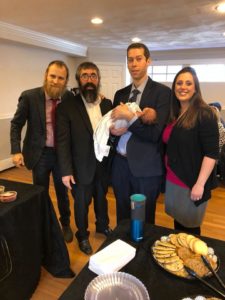 Rabbi Schusterman is an excellent moyle and I would recommend him to anyone in need. He is professional, courteous and competent. He made sure to explain the procedure and answer any questions that we had, and spent a significant amount of time after to instruct us on the proper aftercare. He would check in with us over the phone over the next few days and even made a follow up visit to our home to address a question we had. We would use his services again in the future and recommend him to friends and family.

Rabbi Schusterman is the only Mohel that we would use. He made us feel comfortable from the beginning of our experience with our first son up through our third son. He is thorough, health conscious, and hallachically oriented. He is also approachable and friendly, going above and beyond the “call of duty” not only before, but during and after the Bris as well. I don’t know of anyone else who takes the time to come and visit the baby at home afterwards to make sure the boy is healing properly. He took the time to make my wife and I as comfortable as new parents can be during the entire process and never once made us feel that our phone calls were too much or disruptive. He even took the time to show me his instruments and explain how he sterilizes each one of them to medical standards. His patience and compassion are astounding. He set my sons up for the start of a strong Jewish life and I am grateful for everything he does.

Dr Akiva and Miriam Daum
Hi Rabbi Schusterman,
Folks can definitely contact us for  a reference. 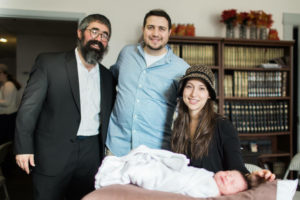 We were very happy we chose Rabbi Schusterman to do our son’s Bris.  Rabbi Schusterman took the time to help us understand what to expect before, during and after the ceremony. He was very attentive to our son’s needs and was patient. We had guests from all different backgrounds and he did a good job  explaining what he was doing during the ceremony and brought a lightheartedness to it. We also appreciated his constant communication with us as our son healed. He was very responsive to all of our questions and got back to us quickly. The fast cloting bandage he uses was also amazing.  Wythe healing process was so much simpler than we expected (and less traumatizing for first time parents). We will happily recommend him to anyone looking for a Mohel.

It was a great pleasure to have Rabbi Schusterman as Mohel for our baby boy. 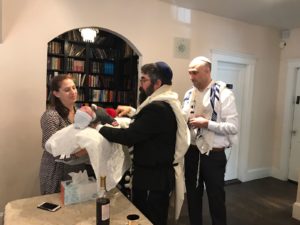 The Bris went very smoothly, we felt that our little boy is in very good hands.
The high hygienic standards, organization and the attention to our questions along the way made us feel very secure.

Most importantly, Rabbi Schusterman visited us at home and guided us through the phone, numerous times, to make sure that the healing process is going well,

as young parents this was super important!
It is worth mentioning that during the routine checkups of the first six months of the baby three different personals (two doctors and a nurse practitioner) spontaneously  complemented the circumcision.
We highly recommend  Rabbi Schusterman and we are grateful for him being with us at this big day of Simcha.

Thank you Rabbi Schusterman for being the Mohel for our son Yossi January 2017. 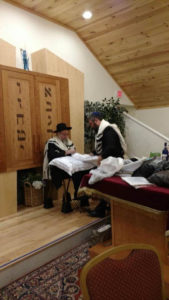 You did a great job and Yossi healed very well and quick.  (Even my mom who had 10 boys was very impressed, which is not an easy feat.) We have already, and will continue to, recommend you to others.
Rabbi Zalman and Mushkie Borenstein
Haverhill, MA

Thank you for helping us achieve the Brit Milah we had hoped for. From our first 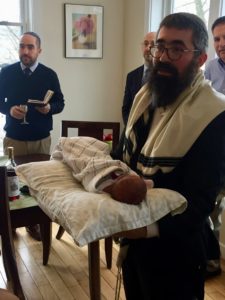 conversation, I knew you would be the mohel for us. How did I know? For starters, you are all about the health and safety of the baby. You answered all of my questions and put my mind at ease (first baby boy). My husband was impressed when you visited our son a few days before the Brit. You also arrived early on the day of the Brit and we appreciated how organized and conscientious you were. After the circumcision, you stayed and helped my husband feel confident with how to care for our son. Then, you were in contact up until Shabbat. On Sunday, you reached out and we could feel your dedication and thoughtfulness. Additionally, you came highly recommend by a good friend. I know I can recommend you in this same way now! Thank you, thank you, thank you!

See note from my Dr.

Rabbi Schusterman did a great job taking care of me!  I don’t remember much about my bris, since I was so little and I’d had a bit of wine beforehand, but from what my mommy and daddy tell me, he was very precise.  He made sure I was healthy in the days before my bris, and checked me to make sure he knew what he was dealing with, before the ceremony.  Afterwards, he gave my mommy and daddy very good instructions to make sure I healed properly and quickly, and made sure they knew exactly what to do.  He talked with them lots of times in the first few days, to make sure I was doing ok.  I was uncomfortable for those first few days, but in the end I healed very, very well.  I feel very lucky that my mommy and daddy picked a mohel who cared so much about making sure that my bris was medically sound, and who takes his job seriously! 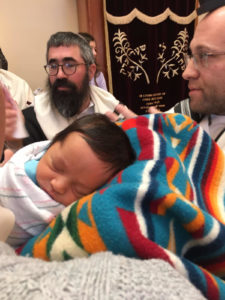 My being a Rabbi and this child being our third son I can say I have some experience with Mohels. R’ Nehemia simply blew me away with his dedication, care, professionalism and spiritually around this important mitzvah and his role as the Mohel. We were made to feel in every way that our son was in the best possible hands imaginable With R’ Nechemia as the Mohel.

Rabbi Avi Poupco
Dear Rabbi Nechemia
Thank you so much for performing the Brisk of our dear son Chaim Meir. The ritual was quick, and the recovery of our child was even quicker. We are happy and satisfied with the Milah you have performed and would be more than happy to suggest your service to anyone who asks!
Avi and Luna Bukiet
Ari & Bethany Anconina
Rabbi Schusterman performed our son Benjamin’s Bris in early June of 2017. He was very accommodating. He offered us the traditional circumcision method according to Orthodox law and a new type of circumcision method which has a faster healing time and was still in accordance with Orthodox practice. He explained both methods thoroughly so we could make an informed decision. After selecting our option, Rabbi Schusterman took every precaution, examined our baby, and checked on the lighting situation (as I learned later these were things needed to perform a Kosher Bris). His actions showed me that he was very serious in what he was doing which provided a lot of relief for my wife and myself.
At the Brit itself, Rabbi Schusterman explained the Mitzvah of the Bris to those in attendance which was a good ice breaker. Rabbi Schusterman then performed the Bris at which point he reiterated the aftercare instructions to my wife and I. He continued to check on Benjamin’s progress afterwards which was very touching. Benjamin healed much quicker than expected.
If anyone needs anymore convincing my wife and I had to take Benjamin to the pediatrician for a routine check up and she told us that whoever performed the Bris did a fantastic and professional job.
Sincerely,
Ari Anconina